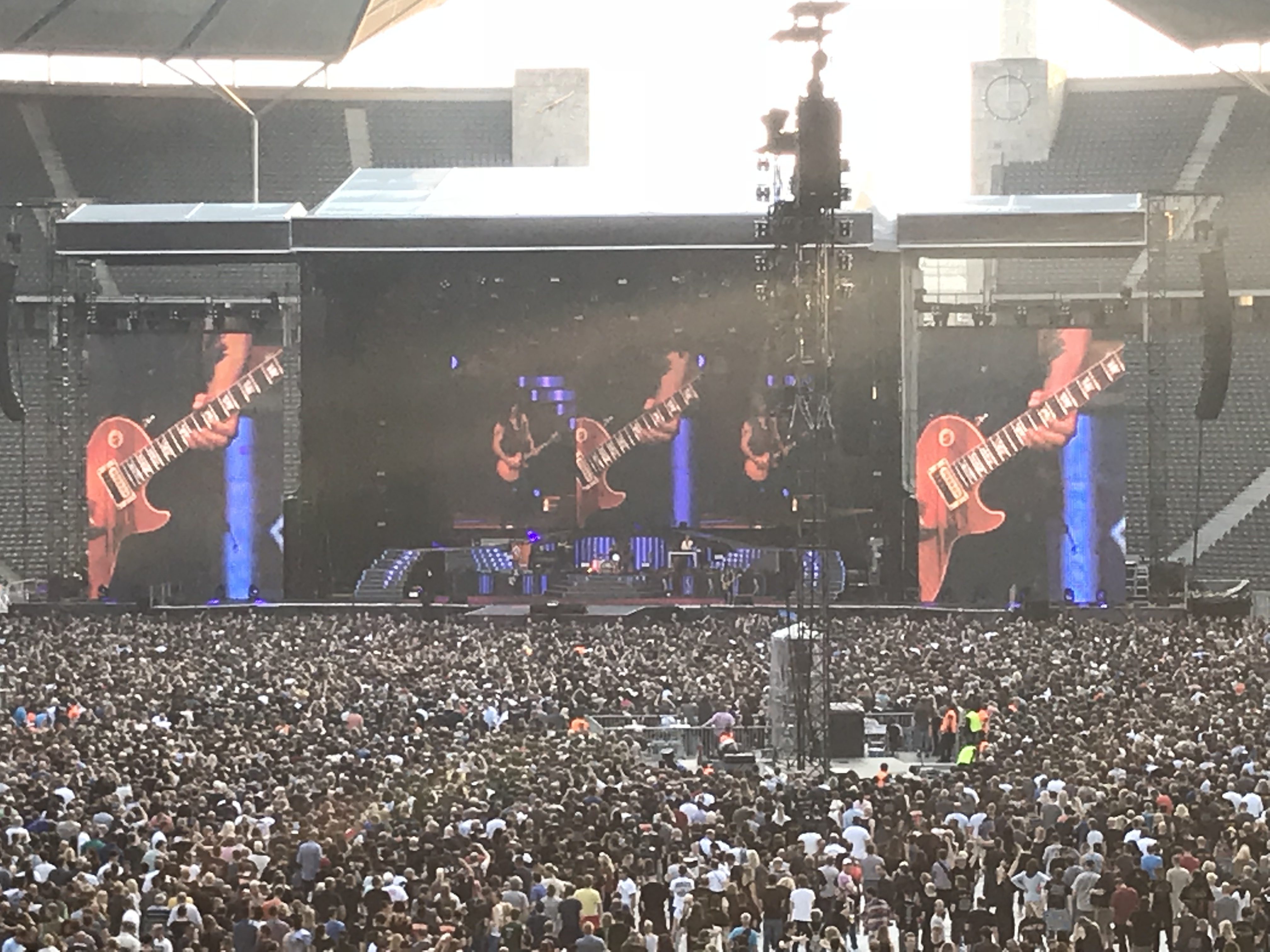 Back in the nineties I was a big fan of Guns n´ Roses. I especially loved their albums “Appetite for destruction”, “Lies” and “Use your illusion I&II”. So I was hoping for some revival of their former greatness and bought tickets when I heard that they were touring through Europe.

As always, when we travel to a concert, we try to combine it with sightseeing and other activities. Berlin was no exception either.

When in Berlin we cannot be there without stopping by and meeting some friends of ours. First on the list was Andreas from “Hofmann´s Haare und Bewusstsein“. So when you are in Berlin, we definitely recommend to get your haircut there. He is brilliant!!

In the afternoon we met up with Charlie’s Angels – you might remember an earlier post. We re-united for a boat trip on the Havel and a nice dinner including our partners and kids. The river Havel is a great recreation area especially in summertimes. Along its course it forms some nice lakes and people are enjoying all sorts of watersports.

The area we visited – around Tegel – was also interesting from a historical perspective, because you still can see some remainders of the former East/West Berlin separation – we passed by some historically interesting spots such as barges sunken in the Havel, creating barriers for people to flee in boats.

The next day we decided to go for a nice little run around the “Tiergarten” with its highlights including the German Reichstag, the Bellevue and others like Brandenburg gate, the Memorial to the Murdered Jews of Europe, the zoological garden, just to name a few. Mainly also because we had to earn our breakfast at the famous “Schwarzes Cafe“. A cafe that is open 24/7 – well almost, it closes only for a couple of ours on Tuesday night.

If you want to follow our tracks as well, here is the GPS data:

I was totally excited, when it was time to leave for the Olympic stadium for the concert. Keen to see my idols of the nineties live on stage. The set lists from the last couple of concerts of the tour were very promising for a great evening with Guns n´ Roses…

Already during the two supporting acts before Guns n´ Roses the sound quality was bad and we just hoped, they would go for a different set up for the main act. The vocals were barely recognizable and just vanished in the sound of the instruments.

One reason might be the concert arena itself, but also the positioning of the loudspeakers. In any case, the sound technician did a very bad job …

However, we thought that it would become better once the main act was on stage. Unfortunately, this wasn’t the case. One thing is that you didn’t understand any of the lyrics; but sometimes it was so bad, that you couldn’t even guess the song they were playing.

Nevertheless, Slash was brilliant that day and also Duff did a great job. And for the songs “November rain” and “Knockin´ on heavens door” Axl was performing great as well. Which was fantastic, as the latter of the two is OUR song – the song that always reminds us on our wedding day …

As a summary, I am disappointed and feel that Guns n´ Roses weren’t able to live up to the expectations I had from a band that I really admired in the nineties. Not sure though if it was them or rather the worst sound technician on the planet.

Happily this was not the only concert we are planning to attend in 2018. So stay tuned for what’s coming up later this year…