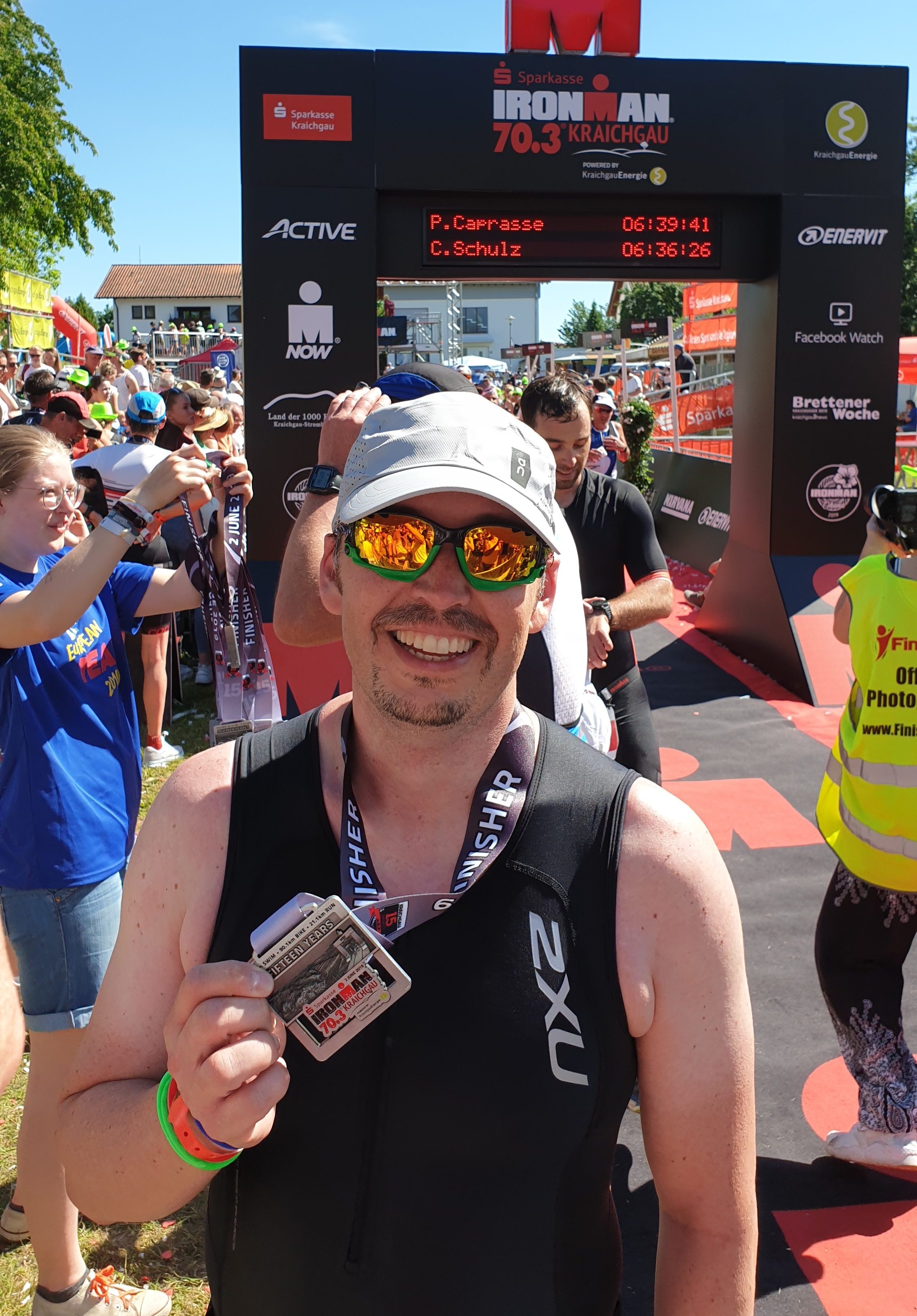 How it all started

It was during a hiking tour with Katharina’s family in the Dolomites, my brother in law and his fiancé came up with the idea that I should join her (Nienke) on her already second Ironman 70.3. Nienke planned to start in Kraichgau and was quite convincing that I could do it as well. Some weeks later I subscribed and hoped that with Nienke on my side I would survive somehow…

Time went by and Nienke announced that she was pregnant and therefore wouldn’t start. There I was, now on my own, training during the winter just to make sure, I would survive this race. Thankfully though both Nienke and Georg supported me with advices and tips both through preparation and also in regards to tactics during the race. Not to mention their logistic support (transporting my bike and other stuff to and from the venue), and amazing support along the track.

Training in winter is probably easier, when you have a goal. However, I did experiment a bit. I didn’t want to train triathlon specific, since I figured that this would be too boring. Instead I rather was concentrating on a good variation in my training – swimming, biking and (trail) running where part of the training, but also cross country skiing, backcountry skiing, core training and hiking were on the agenda.

Due to the lack of specific training I was a bit unsure whether or not I was on track, but training never got boring.

The whole preparation time was rather cool temperature wise and I was hoping that those condition would stay also for the race. But exactly in the race week the summer started with a big bang. Suddenly temperatures rose from low twenties into mid thirties. Who knows me, know that extremest heat is not exactly my territory. So I was a bit anxious about how my body would work on race day.

In order to settle in, we already flew down to Germany on May 30th and checked in in Bretten. A nice little town in southern Germany in the middle of vineyards. This gave us a bit of time to both inspect the race course and do a little sightseeing in the area.

Suddenly it was race day – it always comes a bit earlier than you’d hoped. On the other hand, it was also good to get started. What should actually happen? With Nienke, Georg and Katharina I had the best supporting team anyone could imagine on my side, so I could relax and just jump in.

First on was the trickiest of all disciplines – getting into the wetsuit. I don’t know what I would have done without Georg. Finally I had it on and obviously looked a bit like a sausage, but that’s the way it is with a few kilos too much…

First off – swimming. After standing an hour at the starting line, we all were cooked. The sun was shining, it was already extremely hot (above 30 degrees) and we all were standing in our neoprene suits. I was so happy, when finally the cold water flooded my suit and I could get my body temperature down a bit.

I took it calmly during my swim, since I didn’t know how 1,9 km felt in open water with all the people around. People were swimming over me, I got some sparks and got hit by arms here and there. But was able to stay cool and just do my thing. Faster than thought I was done with my swimming and still felt quite ok.

Here is the GPS track:

From the water onto the bike. For the first time doing a T1, I think it was quite ok. I also found a good rhythm from the start and took it easy. In that heat it was important to drink a lot and to save energy for the final Half Marathon.

The course itself was actually pretty tough for an Ironman. A lot of hills and in total more than 1000 meters of elevation on the 90 km. Some of the ascents were pretty steep. On the steepest through a little town Georg was cheering so loud that the others around me almost fell of their bikes 🙂 I really got goose bumps when I drove by him…

Later in the race I had a little fight with a wasp. Since I am allergic to bees and wasps, I had to stop at the next red cross station to get some medicine. Happily everything went well and I could race on.

Here some impressions of the ride:

And of course the GPS track:

Off the bike and into the running shoes. The start was very easy, to my surprise. So I opened the running part a bit too fast and tried to slow down a bit. The heat was so intense already and I saw many that collapsed during the run. Therefore I tried to keep me cool with ice cubes in my suit, running under every shower I saw on the track and putting a swamp under my cap.

If it wasn’t for Nienke, Katharina and Georg who still were giving everything along the track to cheer me up, I think, I would just have called it a day. But thanks to them I finished and am now able to call me a Semi Ironman… Next time I hope it will be together with Nienke on the starting line 😉

Some Pics of the last part:

And at last the track…