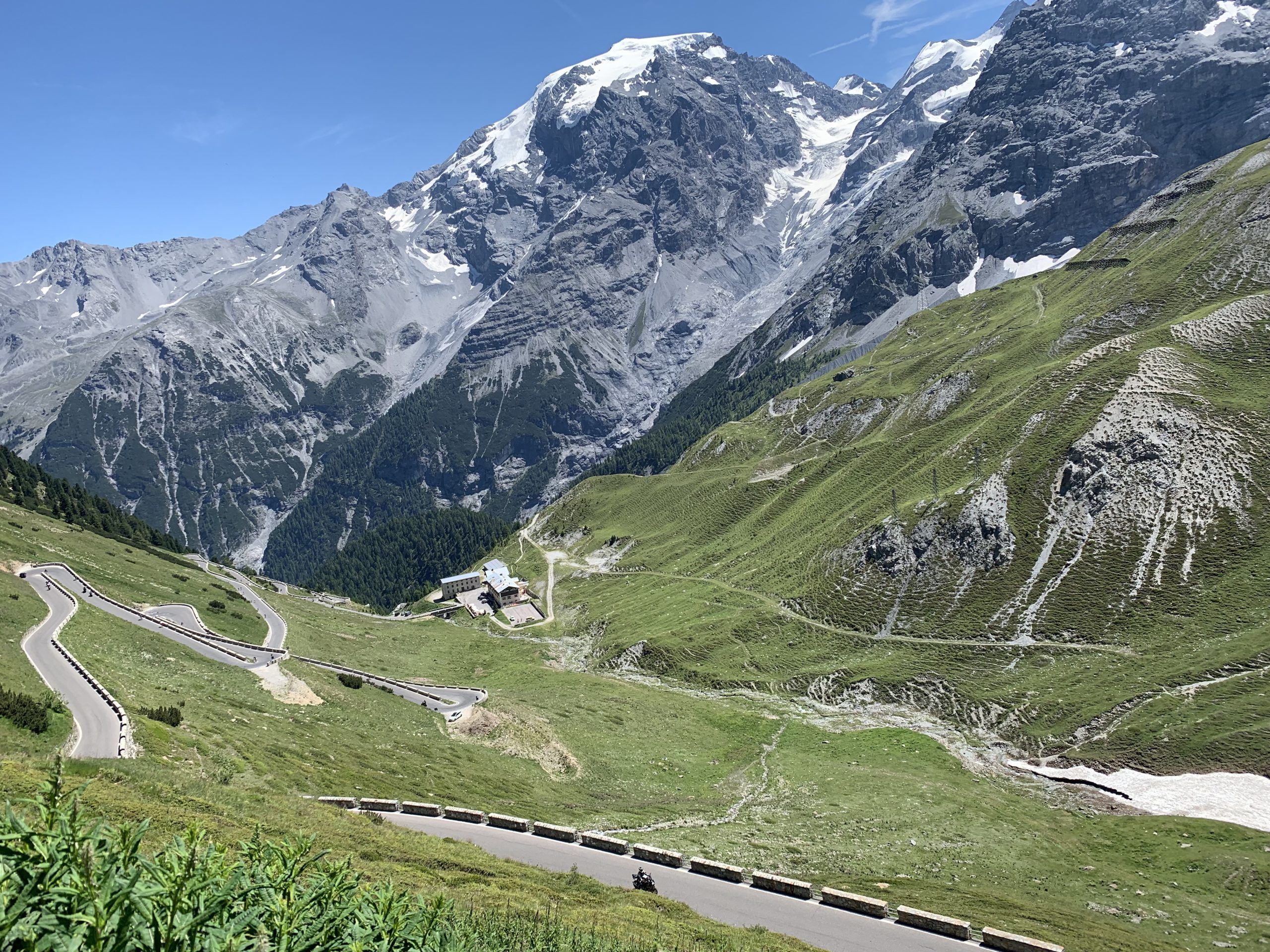 2019 was the year of the Dolomites for us. After cycling the Sella Ronda earlier this year we had one big race event planned for July in the Dolomites – the legendary Giro delle Dolomiti.

But lets start at the beginning … As always, things started with Roland getting excited after reading an article in a bicycle magazine. From what we could read in this article, this race was a perfect fit for us. The race is a stage race: you race on 6 of 7 days with one day off in the middle of the week. The race starts at the same location (Bolzano) every day, except one day, but also that day you can use a shuttle service taking you to the starting point. Therefore you can stay in the same hotel the whole week with no need to unpack and pack every day. In addition, there is only 1-2 sections that are clocked each day, the rest is done neutralized. After the timed section, the group is waiting together and filling up at the feeding zone before continuing the stage as a group – and all of that in the middle of the beautiful surroundings of the Dolomites.

So we thought that is exactly our thing: “easy going until the timed part, and then just continue in our own pace, followed by easy pedalling in the peloton back to the finish line. Little did we know, that the neutralized parts were actually race speed even when cycling in the middle of the bunch.

What came in addition to that was the fact that some riders were quite undisciplined, resulting in quite a bit of stop and go instead of a steady pace. After finding out about that fact during the first stage, we decided to pick the stages we wanted to ride and do our thing in the days we don’t participate in the race. This way we had a great week in the saddle and enjoyed the time.

Arriving in Bolzano and settling in

We decided to book a hotel a bit outside of Bolzano. Since the start of each stage was at the fair in Bolzano (southwestern part of Bolzano) we booked a hotel in Leifers. That gave us the possibility to do an easy warm up by riding our bikes from the hotel to the starting line.

The hotel was perfect. The food was exceptional, the swimming pool helped to recover after each stage and our balcony offered great views into the mountains and hills around Kaltern, Bozen and Meran. After checking in at the hotel, we did the registration at the race office. With bibs and race chip in our hands, we headed back to the hotel to prepare our bikes for the next day.

With such a view we couldn’t resist to have a sundowner on our terrace before getting to bed and rest.

Our first stage started later as the rest of the stages at 10 am, so we could sleep a little bit longer. After a short warm-up through the city of Bolzano it led us via the outskirts of Rencio up to Ritten-Renon. At Rencio the timed stretch started and we winded ourselves up the many beautiful turns in the midst of wine grapes and apple trees. A lot of beautiful views of the Dolomites along the way made us enjoying the ascent. Cycling back to Bolzano via a different route was equally interesting and fun.

During the stage it became clear that we had to approach the week in a different way than planned and do our own thing from the second stage on. Therefore we set down and planned the rest of our own Giro.

It wouldn’t be us, if we wouldn’t share the GPS file and route with you:

In order to decide whether or not both of us should join a stage that was planned for later this week, we did a reconnaissance drive with the car.

While Katharina decided to do a coffee shop tour to Merano and back, Roland did the second Stage of the Giro.

The second stage followed in the foot steps of the Giro d’Italia and the Tour of the Alps climbing up the Passo delle Erbe. This is for sure one of the most beautiful pass of the Dolomites. We approached the pass via Val di Funes, an authentic village which kept its historic beauty to this day. A steep ascent to the start of the timed stretch indicated what was waiting for us during the day. But the timed stretch was unexpectedly easier than thought with even some short descents to shake up the legs a bit. The sight at the top was breathtaking and the downhill to Luson was tricky and fun. From there we headed back to Bolzano.

As always here the GPS data and route:

We decided to drop the 3rd stage and went for probably the most iconic peak in the area: the Stelvio. It is a switch back heaven (60 hairpins up to the top) and an epic climb. Always linked with the big names in road cycling like Fausto Coppi, Eddie Merckx, Laurent Fignon, Marco Pantani, Miguel Indurain, Nairo Quintana or Chris Froome. All of them climbed up there and this pass is for sure on every cyclists’ bucket list.

The weather conditions were perfect, even though it was a bit warm in the beginning. The warm conditions were great when we came to the top and could enjoy a nice Italian pasta and a cold beer in the sun.

Our route was from Prato alla Stelvio up the iconic hairpins and down on the back side partly through Müstair – you can tell by the quality of the roads that you are in Switzerland when crossing the Italian/Swiss border – and back to Prato.

We totally recommend to do it that way. Because on the back side towards Müstair you meet almost no cars and the roads are in perfect conditions. Descending makes so much more fun that way…

Here are some impressions from that day.

For all of you who want to try themselves, here is the Route.

When we did the reconnaissance drive by car, we saw that stage 4 was not that impressive (at least, the majority of the kilometers …). Therefore, and because we still felt the Stelvio in our legs, we decided to go for a coffee shop ride to Trento.

Even though the stats sound easy, it wasn’t. First we underestimated the climb up to Castel Varco (14%). Besides, the temperatures where quite high and we had headwind all the way back from Trento. Nevertheless, holding the cadence high really helped our regeneration.

No tour without a track.