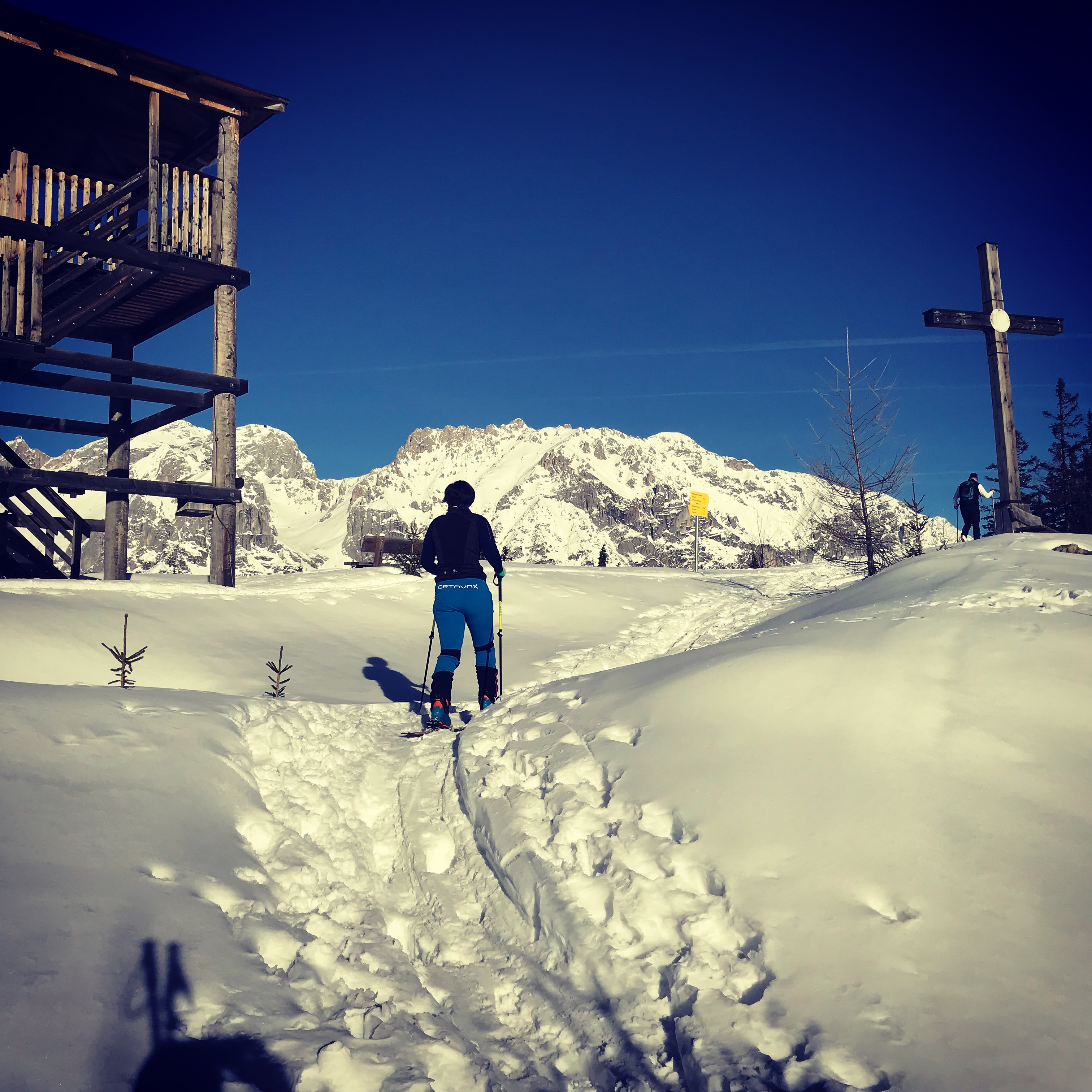 Since we didn’t have a lot of vacation during the year 2017, we decided to take off two weeks around Christmas. The weather forecast for the Austrian Alps also promised White Christmas. So everything was prepared for backcountry Skiing, XC Skiing and other winter sports in winter wonderland Ramsau am Dachstein.

As always just before Christmas, when all the stress suddenly stops and the peacefulness of the season settles in, we did get sick. Happily we didn’t get fever or the flu, only a cold and some troubles with the stomach.

This didn’t prevent us from starting off the vacation with the first easy back country tour. Just up a little hill in deep powder. It shouldn’t be the only BC tour for this vacation.

Proactively burning calories planned to take in on Xmas Eve

Another tour followed on Christmas Eve. We had to burn the calories we intended to put into our bodies during Christmas Eve dinner.

Apropos Christmas Eve Dinner – we had Katharina’s Mum and her youngest brother with their partners over for Dinner. It was so nice and there were so many stories to be told, that we almost forgot to distribute and open the presents. What we had for Dinner? We started off with a salmon-avocado cream in open Lefse-Tortellini, followed by a Fondue and a Gingerbread Tiramisu. All dishes were accompanied by some good wines. In short, we were glad, we did some exercise before the feast 😉

After sleeping in the next day, we did another Back Country Tour with the best of all guides – Karl Tritscher.

In the afternoon, we were invited by Christine – Katharina’s Mum for a typical December-25-Dinner – sausages and Italian salad (a speciality from Hans). This day Florian – Katharina’s other brother – with Mojca and little Felix arrived from Slovenia taking over from Georg and Nienke who took the red eye flight to Spain (apparently too much family 🙂 …).

The next day we new we had to step up our training to get rid of more calories taken in during the last few days. So we did a Cross Country session in the morning and a longer Back Country tour in the evening. The latter we combined with a family gathering on top of the Mountain Hochwurzen with Christine, Hans, Florian, Mojca and Felix. While we skied down afterwards the others sledded down.

The following three three days were dedicated to crosscountry skiing  sessions where we enjoyed the perfect tracks in Ramsau.

In addition to family and sports, we also had some social things on our agenda. We had a great alpine skiing day with Astrid and her kids Bella (our goddaughter) and Lukas. It was so much fun skiing off piste with them. Especially Lukas couldn’t stop taking adventurous short cuts through the woods and jumping from every little hill he found.

Besides that we also had a Glühwein gathering with some friends at our place to celebrate Christmas and New Years’ with our friends and family in Ramsau.

Before the departure to Graz on New Years Eve to celebrate the arrival of 2018 together with Roland´s parents, we did another Backcountry Tour up to the peak of Rittis.

Ingrid had prepared a great 3 course dinner for us – as a starter we had a soup of horseradish and apple, followed by a delicious filet of pork and finished up by a gingerbread mousse with rum plums. From the balcony of their house we had a great panoramic view over the fireworks in and around Graz. The highlight of the evening was the talisman Peter gave to Katharina: a little pig, changing colours and blinking.

We left for Vienna the next day after lunch with Roland’s parents. In Vienna we met up with Christiane and Georg. Two friends of ours we met in Oslo, when they lived there for 4 years. We met up with them in Perchtoldsdorf – a little village just outside Vienna, known for their good wine and the Heurigen. This is the name given to a tavern in the Eastern parts of Austria, where a local winemaker serves his own new wine under a special licence in alternate months during the growing season. The Heurige are renowned for their atmosphere of „Gemütlichkeit“ – the Austrian synoyme for cosyness. Besides the wine you get simple food, and in some places special type of folk music called Schrammelmusik. In Styria the Heurige is called Buschenschank, as mentioned in the entry about my 30th birthday.

It was really nice meeting Georg and Christiane again and time flew. The next day we slept a bit longer and finished up our Vienna tour with some sightseeing in the city center.

Back in Ramsau, we did some crosscountry skiing in heavy snowfall. While we started the session in bright sunshine the weather changed rapidly sending huge snowflakes from the sky.

So perfect conditions for another backcountry tour the next day. Again a tour to burn some calories, since we had decided to meet the Kögeler family for dinner in the castle of our ancestors – Castle Moosheim. We had a really great time catching up after not having met them for 7 years. Since we had some wine accompanying the dinner we decided to take a taxi for the way home and to run back to get the car the next day.

And what a run it was… 26 km in deep snow, what felt like running on a sandy beach and fog in the valley that made it impossible to see longer than 50 meters ahead.

Even though we tried to get rid of the lactate the next two days with two more easy backcountry tours, we could feel the tough workout in our legs for the next couple of days… The first “recovery tour”  was with Gabi up to Hochwurzen.

And since we had to end the vacation the way we started it, we had a final backcountry tour up to  Brandalm just before departing…

As always, good times move too fast and it is time to go back to work again. We take with us a lot of great memories from all the sporty activities in gorgeous surroundings and meeting so many fantastic people.