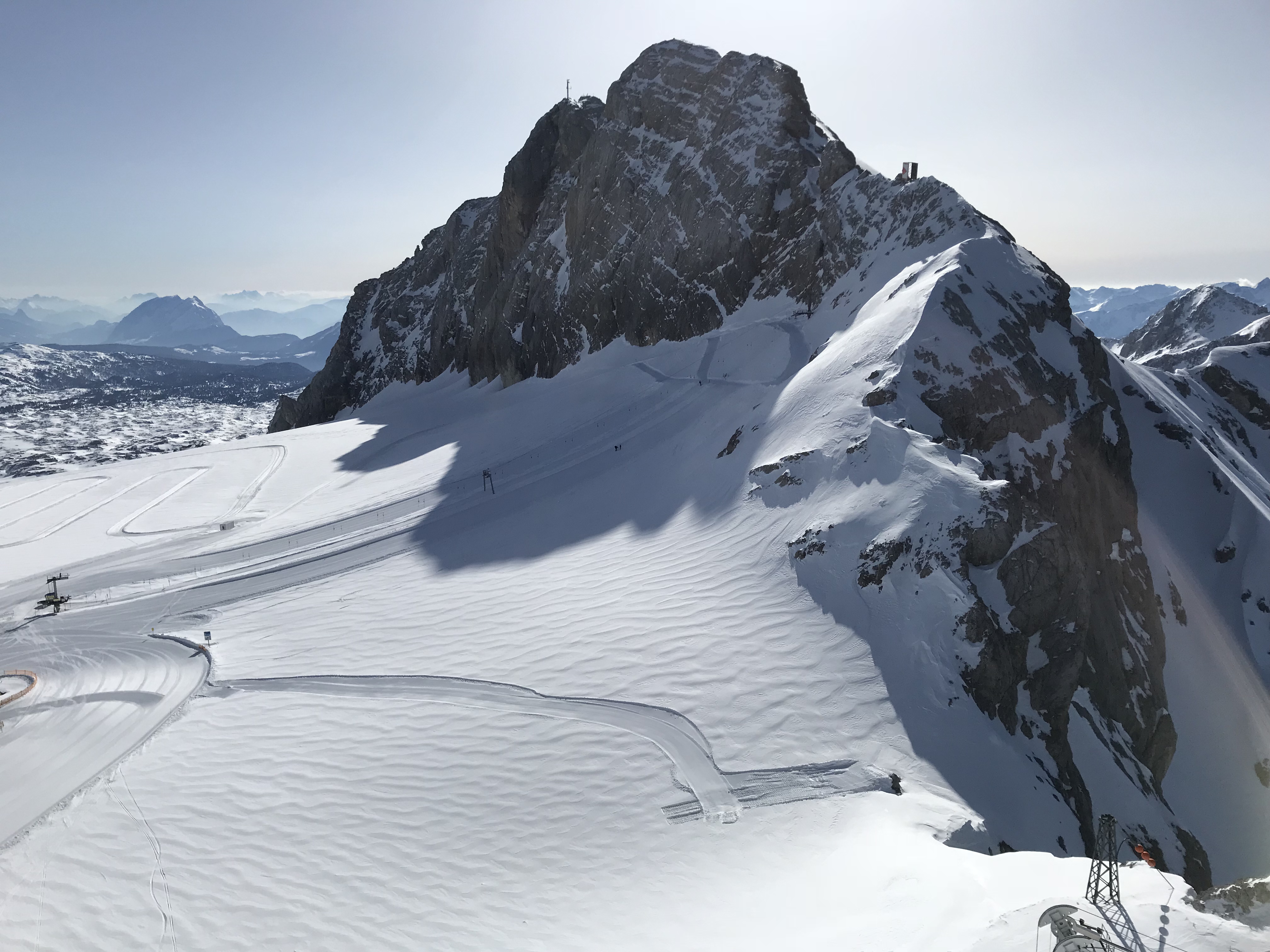 Now that we have arrived in Ramsau, our vacation has started. Or maybe I should say, my Easter vacation started.

we started the day with a nice little Cross Country session in the morning.

After that Katharina had to work – telephone conferences, emails, etc. so that Roland could take care of the private duties and things that needed to be organized.

We have ordered them already last year as a kind of a Christmas present to us. Now we could finally pick them up at our favourite bike dealer – Toni´s Proshop: our brand new road bikes. Of course we couldn’t just look at them – we had to take them on a short ride around the bike shop. We can tell you, they are as fast and great as they look 😉

And that was our short little test ride – we were too busy to get to know our bikes, we had no time for pics:

Katharina still had to work and the weather wasn’t very good either, so we decided to spend the day inside. Me with some indoor training and private staff and Katharina as said working.

The weather got slightly better. So we decided to sleep in and go for a run. The moment we stepped outside it started raining and got worse during the run. Nevertheless it felt good out there and we had a lot of fun running around Kulmberg.

The sun came out again and we had a blast of a day. This time we decided on a cross country ski revival on Rossbrand. The last time we were there was way back in 2007.

Unfortunately we didn’t take the time to wax our skis properly. That combined with a “stop and go snow” and quite some uphills made it a hard day on the slopes for us. Nevertheless we were not sure if it was therefore or because of the astonishing view from the top of the hill (at 1.770 meters above sea level) we were breathless.

And this was the track we did:

In the afternoon we got visitors. Florian, Katharina´s brother, came and visit us together with Mojca and Felix in their camper van. We had a great time together with them, eating lasagne, zipping a good red wine and chitchatting the whole evening.

After saying good morning to our happy campers, we drove to Graz to visit my parents. When we arrived there we did a short run along the river Mur, passing some tourist attractions along the way in the historic city center.

This was the scenic route we took:

After the run we had a wonderful time with my parents eating, talking and laughing until late in the evening.

Time to continue our friends & family tour. After a nice Easter brunch with my parents, we went off to meet with my Grandmother and my aunt. Since there was a slight misunderstanding we caught them by surprise as they were expecting us the next day. Luckily we did visit them on Sunday, because that way the family gathering was even bigger as we also met my cousins Selina and Bernhard with their husband and wife.

It was really great to see them all again as we haven’t seen them for a while. Just being in contact via telephone and social media is for sure not the same… So we updated each other on the latest events and time flew.

On the way back from Graz to Ramsau we couldn’t just drive by Sibylle´s place without stopping by for a visit. There were a lot of stories to share – and we had a great time with Sib & her mother. After some hours of chitchatting we were back in the car driving up to Ramsau, were we arrived in the late evening.

Finally back in Ramsau we decided to do a short Back Country Tour up towards Dachstein. What a great day, sun, fresh snow and spring temperatures. In addition to that we were almost by ourselves.

After that fantastic tour we met up with Katharina´s mother, Christine, Hans, Florian, Mojca and Felix for a coffee and some sun bathing in front of Christine´s apartment. We were introduced into the essentials of camping and could test some of the “must-have” equipment. Actually Florian was so good in selling it, we all ordered camping chairs and other stuff. Maybe he should change jobs and work as a salesman in that area 😉

Florian, Mojca and Felix had to leave to Slovenia in the afternoon and we sat together with Christine and Hans, having a good time.

The following days Katharina had go back to work, whereas I was on myself – at least until Friday late afternoon.

So what to do with all the spare time? I decided to test out my new road bike. Since I had so much time on my own, I thought I should do it properly – despite the little cold I got during the last days. The route I went for was from Ramsau to Graz – to visit my parents. Just the start and finish location may not speak for itself. So here are the figures: 218 km, an ascent of round about 1.300 meters and a head wind from a different planet. I can tell you, this tour was not all fun. But still I had a great time overall on this 9 hours trip.

When I arrived there, my parents were already awaiting me with great nutrition and hydration. I had a great dinner at their place and we had some time to talk about what I have seen on the way.

For example.  I didn’t know how beautiful the historical city centres of Leoben, Bruck an der Mur and Frohnleiten actually are. I also saw some old architectural artefacts on the way like the Badlwand Galerie. An ancient viaduct that was build for the railway back in 1841. I also passed a lot of castles and monasteries like the castle of our ancestors or the monastery of Göss and many others.

It was a fantastic tour and I can really recommend this to everyone. Maybe not in a single day, but rather in two or three days. So that you have time to stop at some of the sights and have a closer look or a guided tour.

On Thursday I was mainly on recovery mode, sleeping, filling up my depots and licking my wounds.

Friday came and I thought I should do a little hike to shake up my legs a bit. It was such a great day, so I felt a bit like Forrest Gump and couldn’t stop walking (yes, I know, he was running). So I did a nice little round around Ramsau, before leaving for our tour to Vienna.

Together with Katharina we visited the headquarters of Alpha Pianos. Firstly to have a look at the first Alpha Grand Piano that has been build and that will be shipped to us in beginning of May. Well, it is the second, as the first was actually shipped to Prince (yes – the Prince!). But our´s is the first Grand in serial production as the one for Prince was a special edition prototype. Secondly, we also were discussing some of the next steps for the expansion in the Nordics. We are the representatives for Alpha Pianos in the Nordics and are planning on a big press event. So stay tuned and you’ll soon hear more about that.

Finally back in Ramsau, we went for a quiet little backcountry tour up Rittis. Quiet because we were the only ones going up there. The lift was already closed a couple of days ago and most of the tourists have left Ramsau. So we went up there to have a small lunch at the peak of the Rittis. From there you have a fantastic panoramic view onto the mountains around. For the way down we took the alpine skiing slopes, which have not been groomed since the last skiing day of the season. This was so much fun. We almost decided to go up there one more time right away 😉

When we looked out of the window in the morning, we decided that we had to take this opportunity to do a final Dachstein glacier crossing for this season. This is a magnificent backcountry tour where you cross the glacier Dachstein from Styria to Upper Austria by skis. We took the first gondola up to the highest point of the tour (2.700 metres above sea level). From there it is mainly downhill  with some short uphills in between to the end of the tour in Obertraun. Back in Obertraun our Taxi was already waiting for us getting us back to Ramsau.

Back in Ramsau, Katharina prepared an excellent cantarell risotto before we had to head for the airport again. There I had to kiss Katharina good bye for the next three weeks.

Until I see my girl again, I will have some more biking and other adventures in Austria, Italy and France on my list. It feels a bit strange though,  as I never had such a long vacation without her on my side before… But stay tuned and I´ll keep you posted on how things go.